Sometimes, it can be easy to forget how often we put our lives in the hands of people we have never met. When we get on an airplane, we 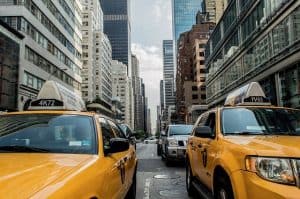 trust that the pilots are well-trained and competent and that those who maintain the plane have done so appropriately. When we get on a bus or in a cab, we expect the driver to follow the rules of the road and hope that the company that hired them screened them sufficiently. When we hop on the L or a METRA train, we hope that the tracks and cars are safe.

Because these conveyances and those who own and operate them are responsible for the health, safety, and well-being of so many passengers, Illinois law imposes strict legal duties on such “common carriers” above and beyond those that other drivers or parties have. When a common carrier breaches these duties and passengers suffer injuries as a result, victims may seek compensation for their losses.

What Is A “Common Carrier” In Illinois?

Generally, a common carrier is a business that transports people, goods, or services and offers its services to the general public under a regulatory body’s license or authority.

Examples of common carriers in Illinois include:

Notably, while taxis and limousine services are common carriers with heightened duties under Illinois law, rideshare drivers and companies such as Uber and Lyft are not. And while elevators are considered common carriers, escalators are not.

Also, common carriers do not include private carriers hired to perform one specific task, such as a moving company.

While a common carrier does not need to guarantee that passengers will never suffer injuries while on board, it does owe a duty to use the highest degree of care consistent with the practical operation of its conveyances to protect passengers. This “highest degree of care” means that common carriers must act much more cautiously and take more steps to minimize harm than most other individuals or companies that only need to exercise “reasonable care” to avoid injuring other people.

This duty continues until a passenger has safely exited the vehicle or other conveyance at a safe location and reached a safe place. The common carrier must also protect passengers from dangers to which they may not have otherwise been exposed and from which they cannot otherwise shield themselves.

A common carrier’s duty to provide passengers with a safe place to exit their conveyance does not require it to protect passengers from open and obvious street dangers, such as those related to other vehicles’ operation on the street.  Furthermore, a common carrier will likely not be found liable for accidents that occur when a passenger fails to exercise ordinary care when trying to reach a place of safety.

When a common carrier fails to exercise the highest degree of care when transporting passengers, those who suffer injuries can seek damages for their losses in a personal injury lawsuit.

While the same principles of liability apply to private common carriers (like taxis and charter buses) and public common carriers (such as CTA buses or METRA trains), the steps involved in seeking compensation from a publicly owned entity may be different. The time limits for making a claim may be shorter as well. That is why it is so critical to meet with an experienced auto accident attorney as soon as possible after being hurt in a crash.

Injured In a Bus, Train, Taxi, Limo, Or Other Common Carrier Accident?

Lake County personal injury attorney Kirk Moyer has earned a reputation for service and success representing and recovering substantial damages for injury victims in Lake County and throughout Chicagoland. Call Kirk Moyer today to get the answers you need and the compensation you deserve. Click here to arrange for your FREE initial consultation now.