Illinois Workers’ Compensation Benefits: How Are They Calculated And The Two Types 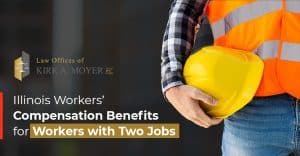 Our client works for a local police department. He also has a second job at a government agency. While working at his second job, he fell out of a defective chair, put his arm out to brace his fall and tore his rotator cuff which required two surgeries. This resulted in him missing a lot of time from both jobs.

In cases like this, we need to figure out what the total amount of his workers’ compensation benefits will be. Is his average weekly wage based only on his salary from the job that he was injured at? What about his income from his other job?

In this article, we explore how Illinois workers’ compensation law applies to situations where an employee works two jobs, is injured at one, and misses time from both. We will also look at how the worker’s benefits are calculated.

In Illinois, an employee that is injured at work is entitled to workers’ compensation benefits. To be eligible for benefits, the employee must have been acting within the “course and scope” of his or her employment – meaning, the employee was doing something for the benefit of the employer.

Before we address the dual employment situation, here are a couple of reminders about how to file a workers’ compensation claim in Illinois.

Procedure for notifying an employer under Illinois workers’ compensation law

Under the Illinois Workers’ Compensation Act, an employee injured at work must formally report the accident to his or her employer within 45 days. All the Act requires is that you inform your employer of the approximate date and time of the work accident. If you do not provide notice to your employer, then your workers’ compensation claim will be denied.

There are some exceptions to the 45 days rule. Having said that, generally speaking, it is extremely important to notify your employer of your injury as soon as possible. You do not want to risk your claim being denied over something as basic as providing notice.

The different types of wage replacement benefits are:

It is important that you retain records of all medical treatment received and bills received.

How is “course and scope” of employment handled in cases where a worker has two jobs?

Above, we referenced a client of ours who was injured when he fell out of a chair. At the time of the incident, he was working (in the course and scope of his employment) for a governmental entity – however, he also held a second job as a police officer.

His injury required him to miss time at both jobs. The question is therefore – how do you determine the amount of his workers’ compensation benefits? Does he recover his lost wages from his government job alone, or can he recover for loss of wages from both jobs?

The answer is that it depends on one very important factor: if prior to the accident taking place, the employee had notified his employer where the accident occurred that he was working two jobs; if so, then he is entitled to recover wages based on his average weekly wage from both jobs.

If the employee had not notified his employer, he would have been limited to recovering for lost wages only from the job where he was injured.

How does this work from a practical perspective? How are workers’ compensation benefits calculated?

Our client’s workers’ compensation benefits would have then been 2/3 of this average weekly wage.

If our client had not notified his employer that he held another job, then he would have only been entitled to use his wages at the government agency ($500.00/week) to establish his average weekly wage.

So, you can see how important it is that his employer was aware of his dual employment prior to the time of the injury so that any work injury, regardless of which employer, will result in the maximum Illinois workers’ compensation benefit rates for the determination of benefits.

If you or someone you know was working two jobs at the time of his or her injury, it is important for them to speak with a workers’ compensation attorney immediately to maximize their recovery. Contact the Law Offices of Kirk A. Moyer, P.C. today for a free consultation at 1-847-244-3444. If you are looking for a worker’s compensation lawyer in Zion or Libertyville, Kirk A. Moyer might be the right attorney for you.