How Do You Negotiate a Personal Injury Settlement?

How Do You Negotiate a Personal Injury Settlement? 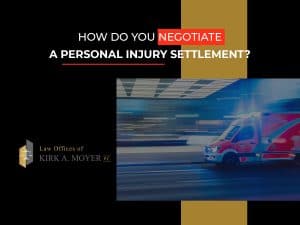 The answer to the first question is: by trying to manipulate and intimidate vulnerable injury victims like you into settling their claims for far less than they deserve.

The answer to the second question is: unless you want to get rolled by an insurer and potentially lose out on thousands of dollars in compensation, you don’t negotiate a personal injury settlement. You hire an experienced personal injury to do so on your behalf.

Settling A Personal Injury Claim With An Insurance Company

Do you know what insurance company claims adjusters do every day? They deal with injury victims who are seeking compensation for injuries and losses caused by their insured drivers. And they know a lot about the process.

They know that every dime that their company pays out in claims is a dime less in profits for its shareholders. They know that their bosses are happy when they settle claims on the cheap (or for nothing at all) and disappointed if a claim results in a big payout. That is why they will use every underhanded trick in the book to manipulate, cajole, or even intimidate injury victims into taking a lowball settlement offer in exchange for signing away their rights.

Insurance companies also know that the injury victim on the other end of the phone probably doesn’t understand much, if anything, about the personal injury settlement process, their rights, or how much their claim is worth. Critically, the insurer also gets that injury victims have bills to pay, may not be earning a paycheck, and desperately need money. They recognize how tempting a promise of quick cash can be for folks in such a situation and will use that to convince a claimant to take the money and run. Unfortunately, victims who take these inevitably unfair, insufficient, and ridiculously low settlements unwittingly cost themselves far more in compensation than they get. All because they tried to negotiate a personal injury settlement without a lawyer.

How Lawyers Negotiate With Insurance Adjusters

Unlike you, but like insurance company claims adjusters, your personal injury lawyer negotiates settlements for a living. They won’t be fooled or intimidated into taking an insufficient offer, and the insurance company will know it. The insurer will quickly realize that they will have a fight on their hands if they don’t step up with a legitimate offer. That fight can cost them a lot in attorneys fees and result in a verdict in an amount far more than what they could have settled for. This prospect can make an insurer see the light and step up with a much more significant offer during settlement negotiations with your attorney.

After an accident, each driver will tell their own car insurance company about the incident and provide their insurer with the other driver’s name, contact, and insurance information (which is why you need to get that information right after your accident).

Claims adjusters or attorneys hired by the other driver’s car insurance company will handle all matters related to your claim. When they reach out to you to discuss your claim, you should immediately tell them to contact your lawyer, if your attorney hasn’t already reached out to them.

Settlement negotiations can happen any time after that. Sometimes, the parties reach a fair settlement without the need to file a lawsuit. More often than not, however, the attorney will file a lawsuit as a way to move the process forward and avoid any issues with the statute of limitations. The parties can continue to negotiate throughout the lawsuit process; occasionally, a personal injury case will settle even after a trial has started.

No matter when settlement discussions occur, each side will argue that they have the stronger case and that the other party should settle because they will lose if the suit goes to a judge or jury. A party’s view of settlement may change as a case moves forward and new facts or evidence come to light.

Don’t get played by greedy insurance companies. Lake County personal injury attorney Kirk Moyer doesn’t tolerate insurance companies taking advantage of injury victims. He is relentless in his efforts to recover the maximum amount of compensation available for his clients and has a long record of success to prove it. Please contact Kirk today to arrange for your FREE initial consultation.