What Is Considered Tailgating And Is It Illegal?

What Is Considered Tailgating And Is It Illegal?

What Is Considered Tailgating And Is It Illegal?You likely know the feeling. You’re driving along when you look in your rearview mirror and see the car behind you so close to yours that the 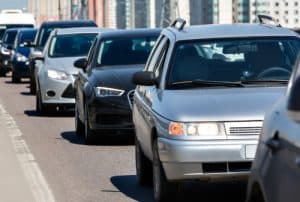 driver seems like they’re in your back seat. Every time you need to slow down or tap your breaks, you can almost feel the impact coming because the other driver is leaving little to no room between their car and yours. This is tailgating, and it can be scary, annoying, angering – and extremely dangerous.

The dictionary defines the act of tailgating as “to drive dangerously close behind another vehicle.” This reckless driving behavior can happen in heavy congestion on the expressway or in light traffic when one impatient or inattentive driver simply can’t abide the slower speed of the car in front of them.

Regardless of why a driver tailgates, it is one of the most common and reckless behaviors on the road and is one of the leading causes of crashes and injuries.

Rear-end collisions are the most frequent type of car wrecks, according to the National Safety Council. It estimates that more than 2.5 million rear-end collisions occur every year in the U.S. These accidents are almost always caused by the actions of the trailing driver following too closely, including such reckless and dangerous driving behaviors as:

Of all the reasons for rear-end collisions, tailgating is easily the biggest culprit. Not only is tailgating likely to lead to a rear-end crash, but it is also considered a particularly aggressive driving behavior that can inflame tensions and lead to road rage incidents or other provocative conduct. That is why tailgating is against the law in Illinois.

Specifically, Section 5/11-170 of the Illinois Vehicle Code prohibits “following too closely” and provides that:

The driver of a motor vehicle shall not follow another vehicle more closely than is reasonable and prudent, having due regard for the speed of such vehicles and the traffic upon and the condition of the highway.

Following too closely is a petty offense and classified as a moving violation in Illinois that comes with fines of up to $1,000, mandatory fees and court costs, and points on your driving record.

It’s not rocket science: if a tailgating driver doesn’t leave enough room between their car and the car in front of them, the chances of a rear-end crash increase exponentially. So too does the risk of a serious injury, even from low-speed impacts.

In a rear-end accident, the energy from the trailing car is transferred to the vehicle it strikes. Since the leading car occupants are not expecting the impact, the shock and force will throw their bodies forward while their heads are thrown backward, only to be whipped forward again when the car stops. This causes the condition commonly called “whiplash,” which is the most frequent injury caused by rear-end accidents.

While whiplash can undoubtedly be very painful and debilitating, rear-end crashes can lead to even more severe injuries, including:

To avoid tailgating, the Illinois Secretary of State suggests that drivers use the “three-second rule” to determine a safe following distance. To use the three-second rule, a driver should pick a fixed object on the road ahead, such as a tree, sign, or overpass. When the vehicle in front passes the selected item, the driver should count “one-thousand-one, one-thousand-two, etc.” The driver’s car should not reach the object before the count of one-thousand-three. If this occurs, the driver is following too close. If the road and/or weather conditions are not good, the driver should increase the following distance even more.

If a driver is tailgating you, move to another lane or slowly pull over and let the vehicle pass.

Lake County, IL car accident lawyer, Kirk Moyer, has earned a reputation for service and success representing and recovering substantial damages for injury victims in Lake County, including Waukegan, Libertyville, Gurnee, and Round Lake. Please contact Kirk today to arrange for your FREE initial consultation about your tailgating accident.